We wrapped up our stay in Rockwood and got out very early today, hitting the trail at 7AM.  The weather forecast looked like storms in Cumberland and we wanted to get done before they hit.

At the Rockwood Hostel on Main, the railroad tracks run right behind the building about 40 feet away. Last night we put a few coins on the tracks to get some CSX made souvenirs.  Joe had never smashed a penny before.  We found most of them, but looked a little this morning before leaving to try to find the rest.  No luck.  I’m guessing somewhere west of here is a boxcar with a curious copper smudge stuck to its wheel.

The first great thing to see is the Salisbury Viaduct.  It is an old railroad bridge that spans 1908 feet, over 100 feet above the valley below.  It crosses over route 219, the Casselman river, and the CSX rail lines. It is one of my favorite parts of this route. You get a spectacular view of the surrounding countryside and the thrill of being so high above the ground. 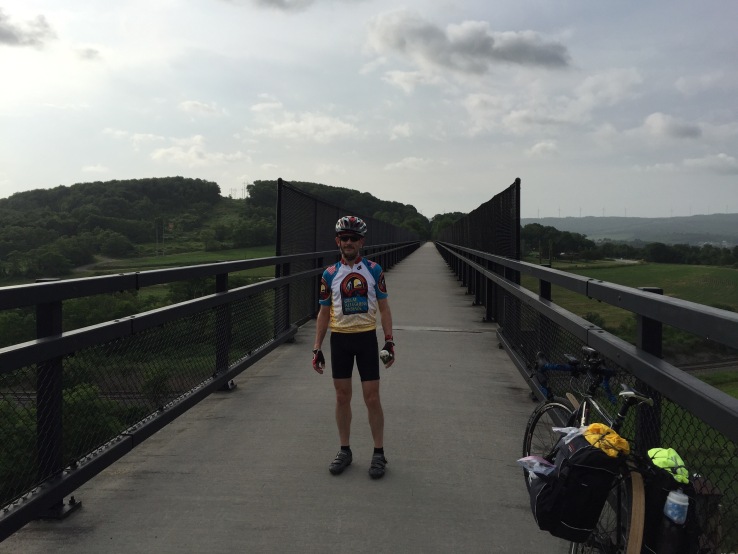 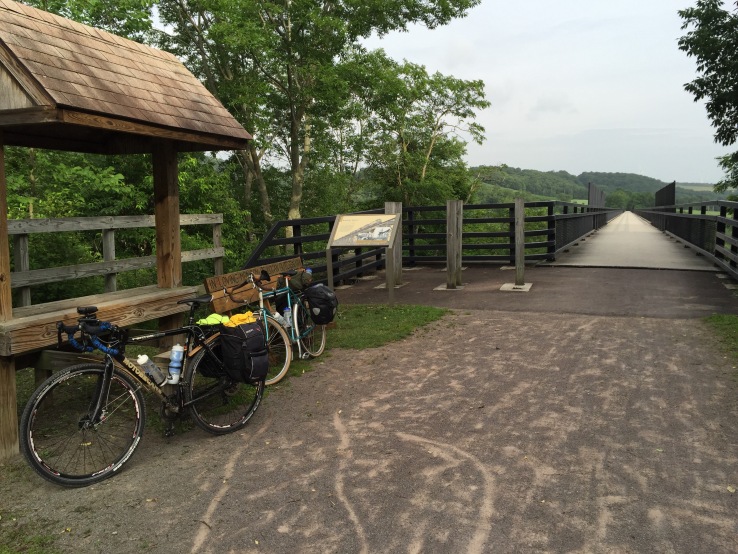 A short distance past the viaduct takes you to Myersdale and the old train station, now a visitor’s station.  We decided to skip the visitor’s station in favor of heading into the town of Myersdale to look around. Joe really likes his morning coffee and so we decided it was a good opportunity for us to see some new things and get him some java.

To get into the town, you go downhill about a half mile.  We found the G.I. Dayroom.  What a terrific find that was!  The nicest people in the world were all gathered for breakfast.  We sauntered up to the counter and decided a second breakfast was in order after seeing the food being served. Several different locals all chatted with us about the world and our bike trip.  I ordered a plate of home fries and watched as the cook prepared them right on the other side of the counter.  No exaggeration, these have to be some of the best home fried potatoes I have ever had. 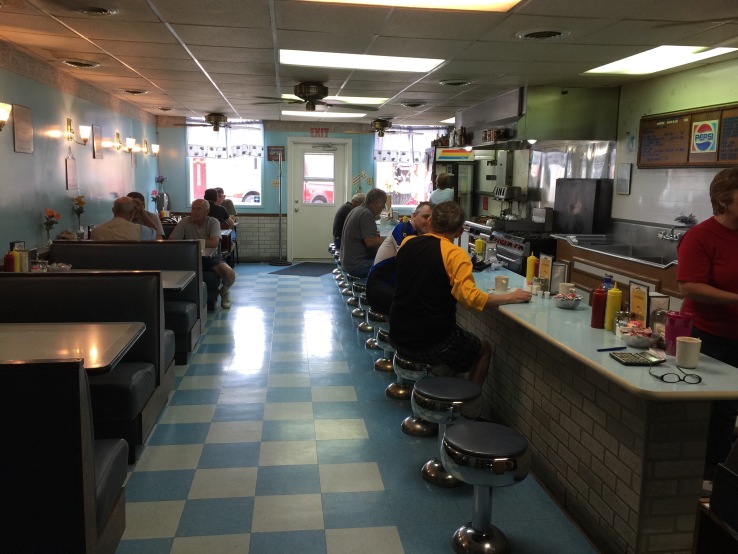 I find something beautiful about these little towns. Everyone is friendly and genuine. The pace of life isn’t about fancy cars and style.  Family is important and conversation is more important than the latest cell phone.

After a few minutes of conversation, we signed their guest registry and climbed back up the hill (ouch!) to the GAP.  After the last two days, my legs were pretty rubbery climbing up a prime example of one of Pennsylvania’s steep hills.

A few miles more took us to the highest elevation point of this whole ride, the Eastern Continental Divide at 2392 feet. We ran into Chris and Sarah, a dad and daughter whom we have been leapfrogging for the last two days.  After the obligatory pictures, we kept moving towards Frostburg. 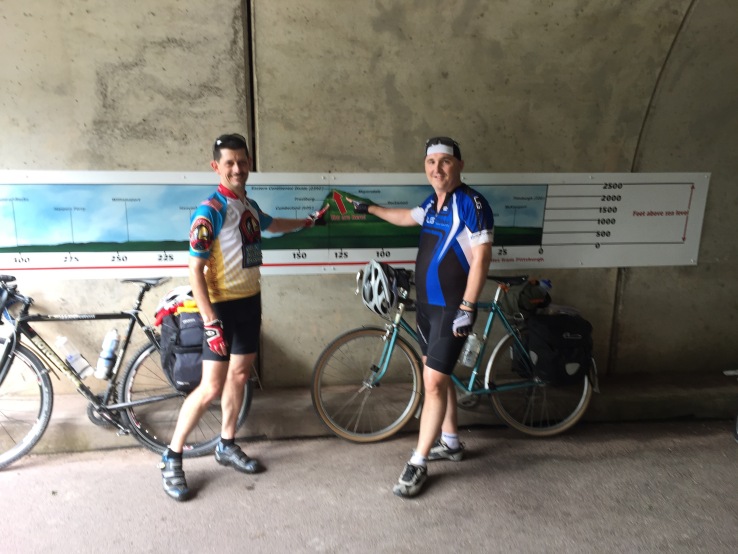 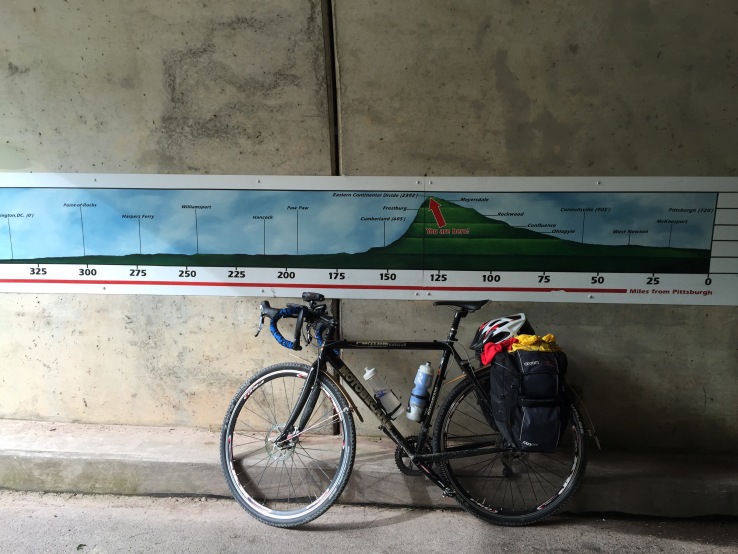 The nice part of reaching the top: it is all downhill for the rest of the day, sort of.

The next big iconic part of the trail is the Big Savage Tunnel.  Built in 1911-1912, and abandoned in 1975, this is former railroad tunnel that had fallen into severe disrepair.  It was converted for bike traffic and restored with some fancy drainage system to keep it from caving in again. It is about 3,300 feet long and really chilly inside. It is pretty well lit inside but still requires some careful riding skills due to the darkness.

Upon exiting the tunnel, you are treated with one of the best views anywhere.  It was a bit overcast today, but on a good day you can see really far.

Next stop was the Mason Dixon line, separating PA from MD.  There is a nice monument there with the actual state line.  We met a nice young family heading to Pittsburgh.  We stopped and chatted for a while and pushed on to Frostburg, MD.  Their daughter had a ride mascot too, so we snapped a picture of Mr. Hamster, Leo (Joe’s mascot), and Fluffy the Penguin. 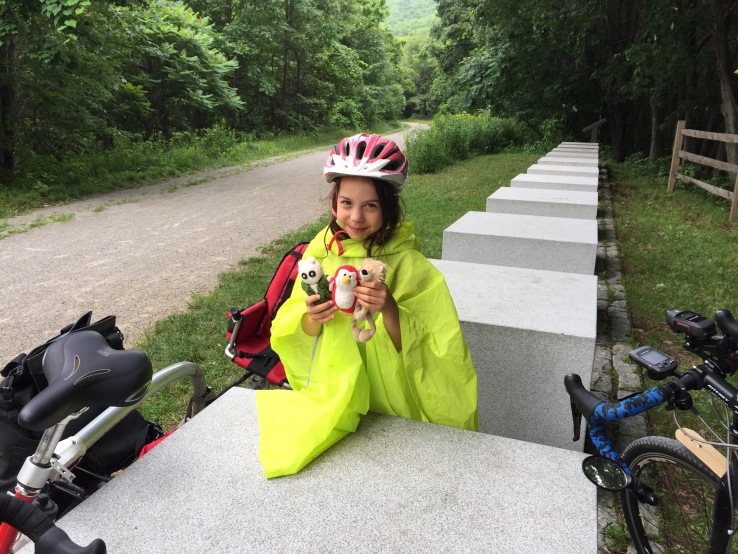 We decided that when we reached Frostburg that we would go up the switchbacks into the train depot area in search of the elusive ice cream.  After making the climb, nothing was open.  Not a peep.  Like a ghost town. The train only runs some days, and today wasn’t one of those days.

The last 22 miles from the divide are all down hill.  It felt good to have a gentle pedal down. The last two days of gentle climbing were taking their toll on my legs.

We arrived in Cumberland a little after lunch and stopped by mile 0 of the GAP, which then begins the C&O canal path which will carry us into DC over the next 185-ish miles.

It is customary to kiss the mule’s behind when you arrive.  So we did. 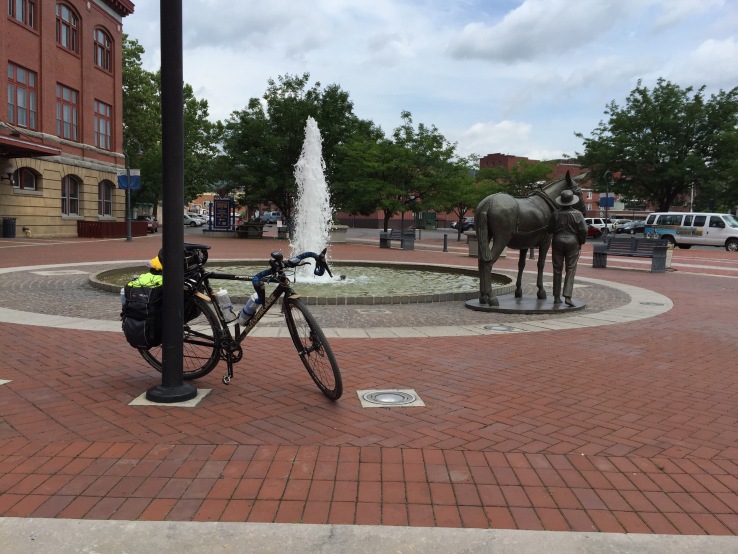 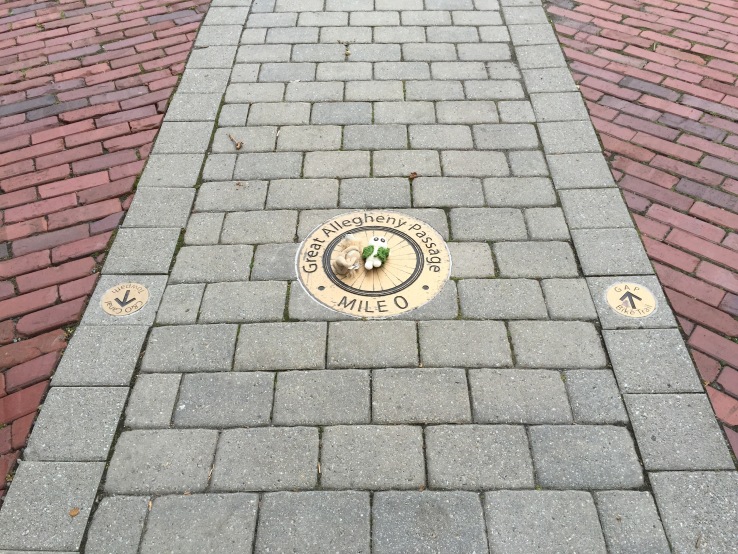 We checked in at the Fairfield in Cumberland, scrubbed up, and went in search of food.  The Crabby Pig has been good to me in the past, so ribs it was.  And 22 ounces of frosty coldness to wash it down. 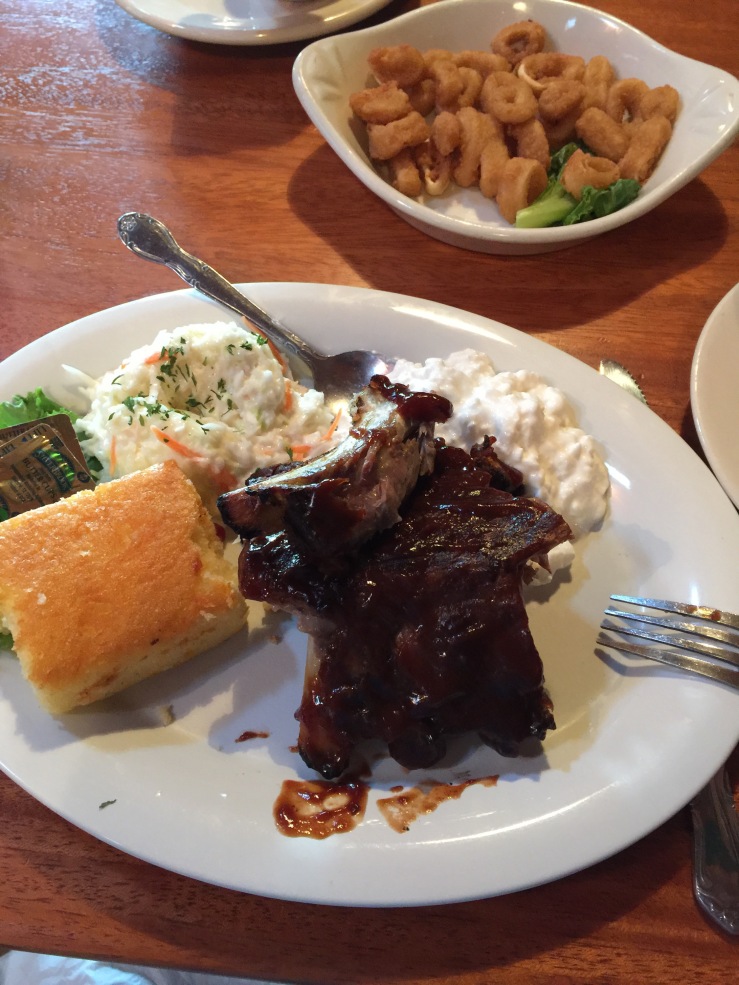 Joe and I walked down to the Queen City Creamery to get some long sought after ice cream. Well worth the wait.

Back at the hotel, I took advantage of the washer and dryer to clean our clothing.  It will be nice to have all clean gear tomorrow.

Not sure what activities we have on tap for tonight but I expect it will be very subdued. I am super tired and ready for bed already.