Last night, I spent some time talking with my dad on the phone. My grandmother (his mom) has been having some very significant health issues.

I am heading back to my mom and dad’s house so that they can have the ability to head to Florida to be with Grandma. I think Dad had been waiting for me to finish my ride – but I believe it is much more important for him to be able to leave.

So this morning I said goodbye to my friends here and packed my things to head home. Depending on what the next few days hold, I might consider catching up with the tour, but this is likely the end of my tour this year. Either way, no regrets on my part! I’ve enjoyed the last two days of riding.

As I said good bye to my friends, we decided to try to find another opportunity to ride together either this fall or next year. Bike touring is a great way to make some great memories and friends. I was especially happy to find out that two riding friends, Rich and Mary, have been dating after meeting last year on our ride from DC to Pittsburgh.

With that, this year’s trek comes to an abbreviated end. As a Cubs fan always says: “There’s always next year!”

Last night was pretty uneventful for sleeping. Cool temps and a solid breeze. I woke up a little before my alarm and decided just to break camp. It was nice to not feel rushed.

I rode with Jim and Mike again today and we had a very good ride. Early temps were cool and nice. By noon, it was a bit on the toasty side, but still pretty nice.

We wound our way across the beautiful countryside. It is very rural here. The corn is about two feet tall and the apple trees are just starting to show small fruits. This part of New York is very beautiful.

We made very good time and enjoyed our rest stops put on by the PTNY and locals. They always have an abundance of fresh fruits and snacks. We arrived in Genesee Valley Park around lunch time and decided to join a bike tour into Downtown Rochester along the Genesee Valley path. The tour guide led us up the western side of the river and into downtown. We stopped at the old aqueduct that used to carry the canal into downtown. After the canal was moved south of the city, the aqueduct was reborn as a trolley subway system, which has long-since been abandoned. The top level is now a major downtown road, and the lower level is vacant, except for the non-stop graffiti lining the walls.

We grabbed some pictures and went down to the high falls district. This is an area where water used to power the economic engine of the “Flour City”. It has been many years since Flour was a major output of the city, and the city is now known as the “Flower City”.

We had to take some downtown surface streets to get to the east side of the Genesee river. We then rode southbound back towards Genesee Valley Park to pick up the canal path again.

Along that route, we rode through the campus of the University of Rochester – where I went for my undergraduate studies. We broke away from the tour and I quickly showed Mike and Jim around campus, hitting the major high lights and seeing the quad.

After getting back on the trail, we did our last few miles to get to Pittsford. I loved living here many years ago, and I looked forward to arriving.

After arriving, we picked out a camp spot and started setting up tents. Right in the middle of setting up my tent, the skies opened without warning. In moments, everything was wet. Sigh. A few minutes earlier and I would have not pitched tent yet. A few minutes later, I would have been pitched and dry. But the timing was pretty bad and I got soaked along with the inside of my tent.

The rains paused long enough to set up and dry out. I got my belongings spread out and mostly dry. My genuine army-surplus dry bag did not keep water out. More ugh.

As I sit here blogging inside the school, I am watching heavy rains pelt down on the camp sight.

So, in summary a very great day of cycling, but I am reminded that tent camping is not my favorite way to sleep, especially when it is raining.

Tomorrow will take us a long way into Seneca Falls. Hoping to stay mostly dry along the way 🙂 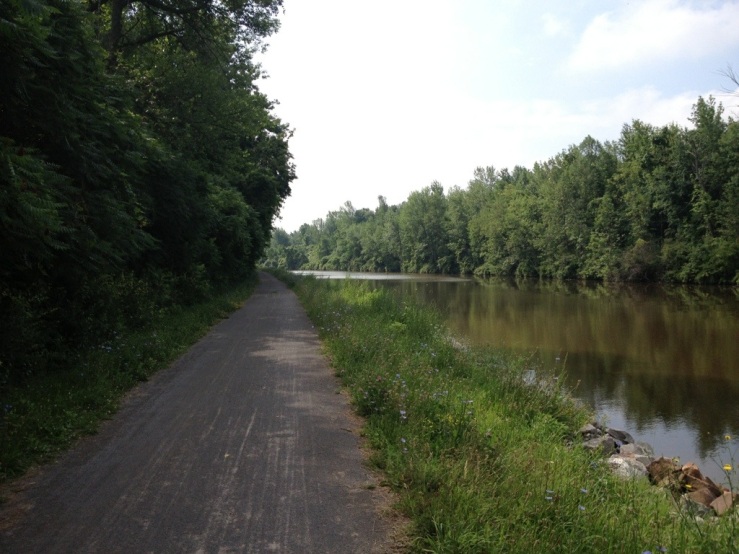 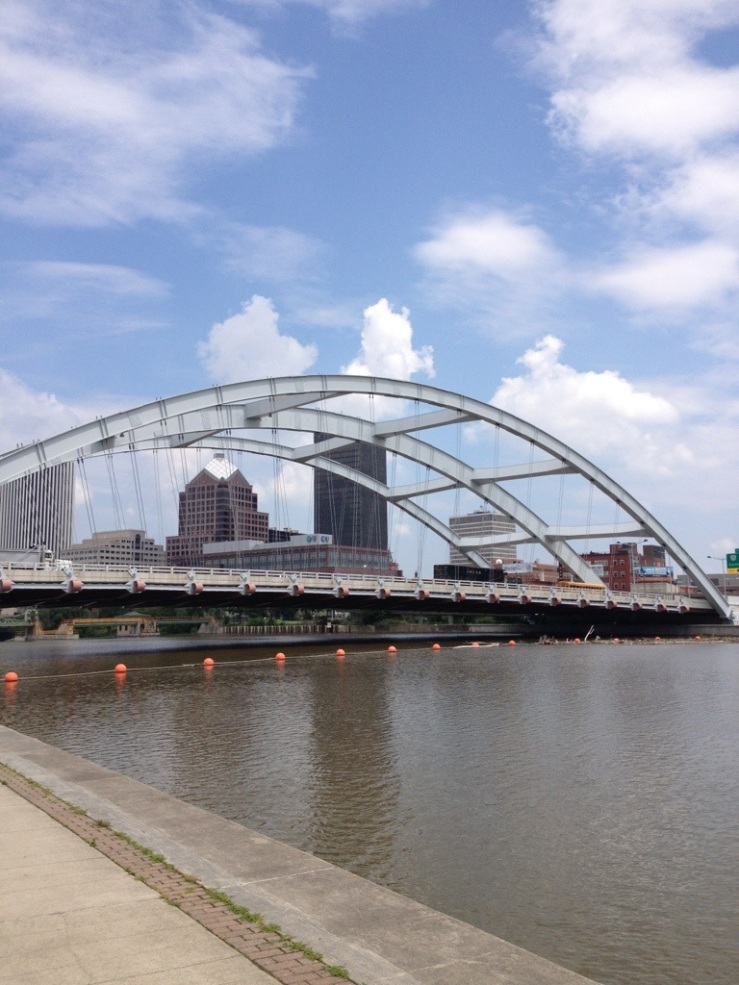 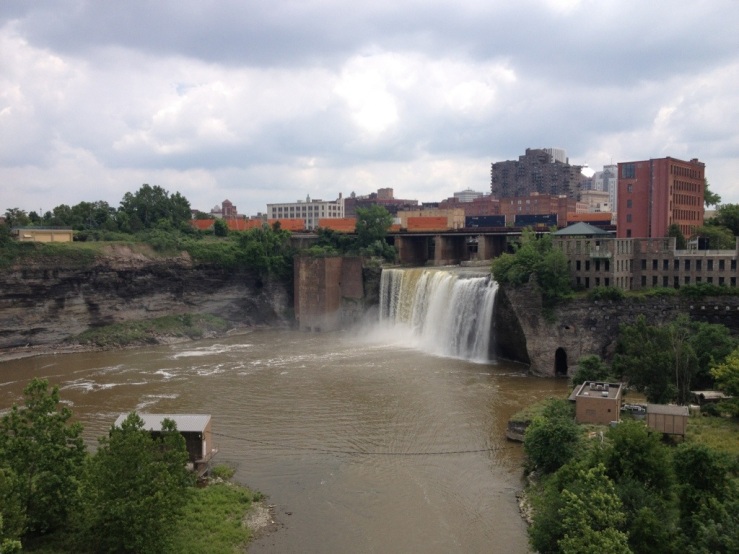 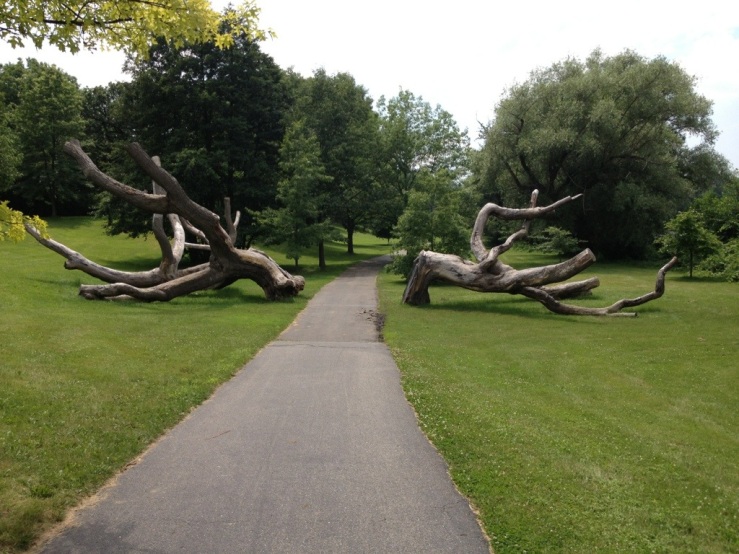 Today was the first day of the ride. We camped last night at the Nichols school in Buffalo. I checked the weather before going to bed and was prepared for rain. Lots of rain. I had just re-waterproofed the seams and fly on my tent a couple of weeks ago. I am really glad I did. It rained a lot but I stayed pretty dry… until 4am. I had unzipped a vent in the fly to keep air circulating because it was hot. The loose fabric made a nice puddle zone and at 4am, enough water accumulated to tip the puddle over in my head. Needless to say, I’ve been awake since 4am. A little bonus prayer time.

They fed us well and I loaded my fairly wet camping gear into the truck. We had a pre-ride kickoff by a few officials and then we routed across surface streets and some nice multi-purpose recreation paths to get out of Buffalo.

Three years ago when Anne Marie and I rode this route, we missed a critical turn and ended up going about 6-7 miles out of our way and backtracking. Anne Marie: I saw where we missed that turn today 🙂

I spent most of my ride today with Jim and Mike – two friends from Virginia that I met last year on the sojourn ride. Once we were clear of the bulk of the riders, we kept a pretty good pace all day. A nice tailwind helped, too.

We arrived in Lockport by about 10:30 and grabbed a lunch while we waited for a 12:30 boat ride that took us through the massive locks. By about 2pm, we were back on the path to Medina.

The weather was absolutely perfect for riding today. The morning was overcast and cool, the afternoon was sunny and mild. The wind was mostly to our backs and cool.

We arrived at Medina middle school and set up tents in a shady spot. After getting everything dried out and eating some dinner, the amazing shower truck was waiting! What has 18 wheels, plenty of hot water, sparkling clean, and is a welcome sight at the end of a day? The shower truck! I still think the inventor should receive a Nobel prize for this amazing truck.

Tomorrow’s ride takes us into Pittsford. Very familiar territory, since I lived there for a few years after college.

I hope tonight’s camping is a little dryer experience… Otherwise, this has been a pretty fabulous day on the Erie Canal. 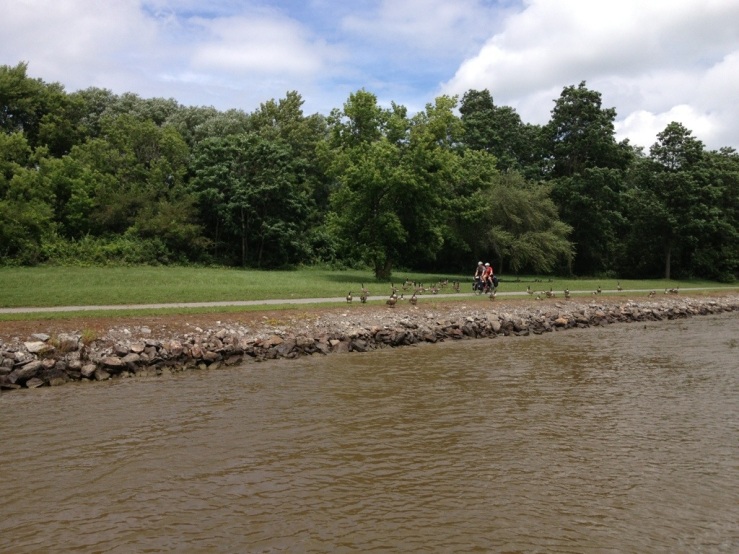 Tonight we met at the Nichols School and set up our tent city. We camp out tonight and begin the ride tomorrow morning. We leave Buffalo early in the morning and cycle a mix of surface streets and canal path to Medina.

When I signed up for this ride, I arranged to meet with four friends from last year’s ride on the C&O/GAP. I was hoping it would be easy to find them when I arrived. Amazingly, Rich was one of the very first people I saw here at the school. Over dinner the others all convened as well. It was a nice meal to catch up since we had left each other last summer.

This ride group is pretty big my my standards. Around 575 riders in all. Many are doing this ride for the 2nd or 3rd time with this tour. The oldest rider is 89 years old. Wow! The average age is 52. There are many young kids and families riding together.

I am definitely missing my family already. Three years ago, Anne Marie and I rode this route together on a self-designed ride with Stephanie supporting us. I have great memories of that time with Anne Marie and wish she were here to ride again.

As the sun has gone down, I am settling in – trying to remember the best way to situate my belongings in my tent and bags. Stephanie bought me a really nice air pad and it feels about as good as I could hope for :). Thanks, Steph!

Time for bed. Blessings to my family and friends!