I have to put a disclaimer here – I am completely worn out and can barely keep my eyes open.  So if there are lots of typos and poor grammar, it is to be expected…

Last night was one of the most relaxing evenings I have had in a while. We hung out in the rectory at St. Peter’s in Harpers Ferry, washed our laundry, listened to the trains go by, popped some popcorn, watched Field Of Dreams, and promptly passed out. I slept so well.

After dinner, we found out that one of the local B&Bs stocks a fairly large room with various goods for hikers and bikers coming through.  We went in search of breakfast items. We bought some milk and a large blueberry muffin for the morning.

After our breakfast, which consisted of lucky charms, milk, a blueberry muffin, and an energy bar, we packed up at a leisurely pace and set out. Our first stop was a little shrine to Mary behind the church. We asked for her intercession for safety and good weather.

The weather report for today predicted rain at some point.  I am happy to say we saw no rain at all!  However, we saw a lot of mud.  It rained overnight and soaked the trail.  There were stretches of decent conditions, followed by areas with lots of puddles and mud.  My legs and bike were absolutely covered within the first hour of the ride.

There are not very many towns along this stretch of the C&O, so we planned on riding a bit and eating energy bars until we found a place to eat.  About 20ish miles, I began to notice that I was needing food badly.  We came across Whites Ferry and stopped at the snack bar, hoping to find something to eat. It was still pretty early in the day, so the grill wasn’t up yet.  We settled for some prepackaged snacks and moved on.

Whites Ferry has the only working ferry boat on the Potomac river.  We contemplated taking the boat across and back, but decided against it since we wanted to get to DC soon. 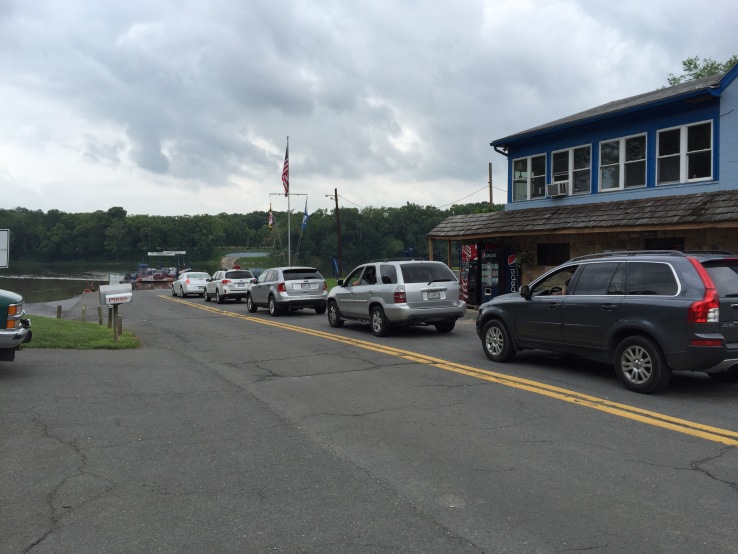 You’ll notice on the building, there are flood markers.  Check out how high the water has gone in the last few decades.

Without any decent meal, we continued on, hoping to find something to eat.  We had no luck for a long distance.  When we finally reached the Great Falls, we stopped at the snack bar and each grabbed a Nathan’s hot dog. I really needed the food, and boy was it a good hot dog.  My outlook on life improved significantly.

We then walked out on the pathway over the Great Falls.  It is really amazing to see that the same glassy-calm Potomac from a few miles back is choked down to a very small and rocky passage.  The roar of the water is pretty neat. 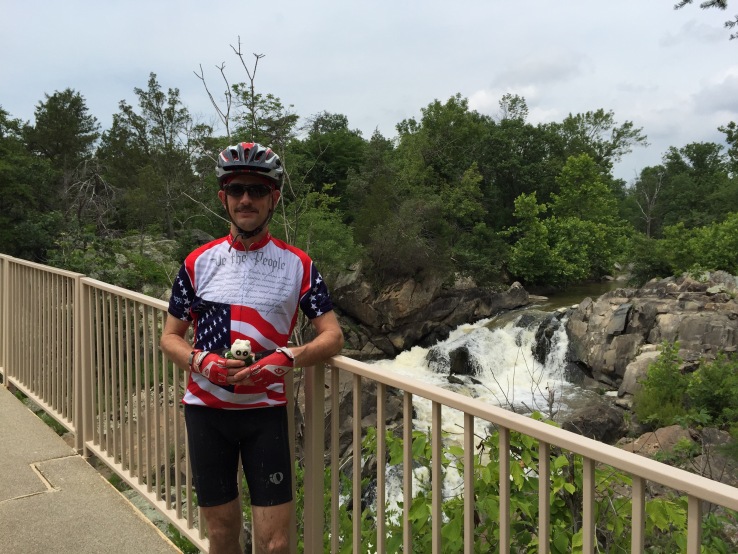 At this point, we were only about 20 miles from our destination and we were anxious to get there.  So we packed up and pointed down the trail towards Georgetown.

The trail was very congested at spots, but we were able to navigate well and made good time. Along the way, we saw several blue herons and a couple more turtles.  We also saw a jet-black squirrel.  I’ve never seen a black squirrel before.

Outside of Georgetown, we decided to jump on the Capitol Crescent trail because it is paved!  We missed out on seeing a few pretty neat historical things, but after feeling like I was going to rattle my brains loose for the previous 350-ish miles, pavement looked pretty awesome.

We rode all the way to the Thompson Boat Center and found our way to the elusive Mile 0 marker.  It is very hard to find, but I had done a little digging on the Internet and knew where to look.  It is located at the original gate between the Potomac and the C&O canal.  This non-imposing little gate is tucked away in a corner behind the regatta raft garage.  However, this gate holds modern significance, too.  It was known as the water-gate of the canal.  And immediately across the road is the hotel named for this unassuming little trench: The Watergate Hotel. 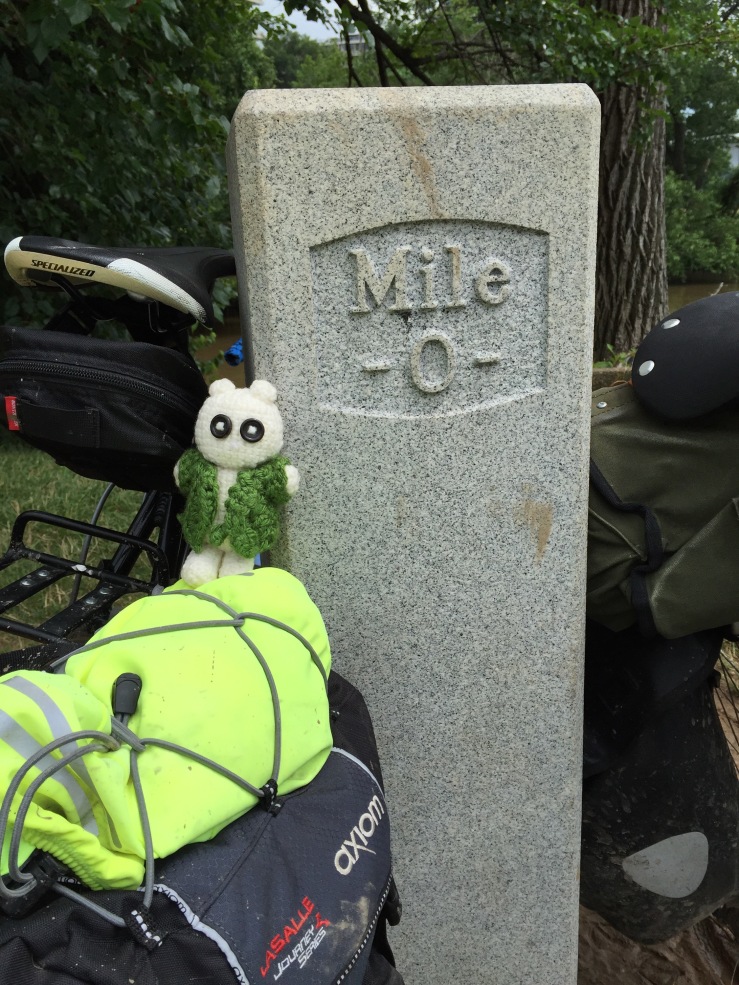 After a couple of pictures, we set about trying to get to our destination: St. Peter’s on Capitol Hill.  We slowly picked up some trails and sidewalks to get to the memorial area.  We briefly stopped in front of the Lincoln Memorial to snap a quick picture and then started weaving our way through pedestrians eastward to the mall.  There were a lot of people in town and it was slow going. We traveled up next to the WW II memorial and then stopped in front of the Washington Monument to take a celebration picture. 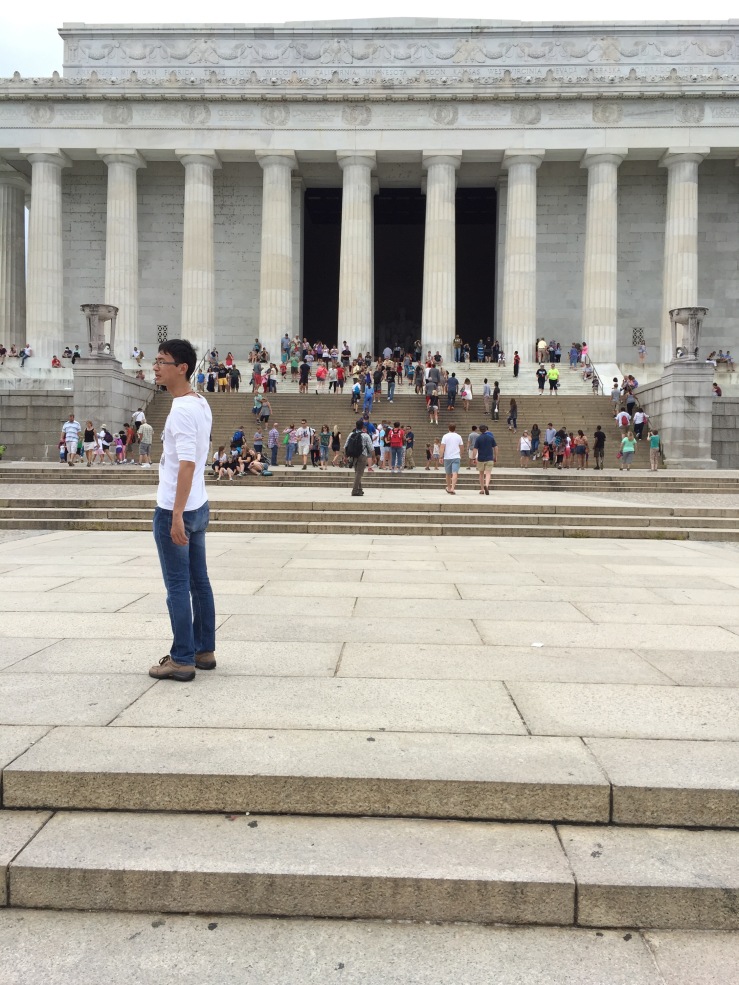 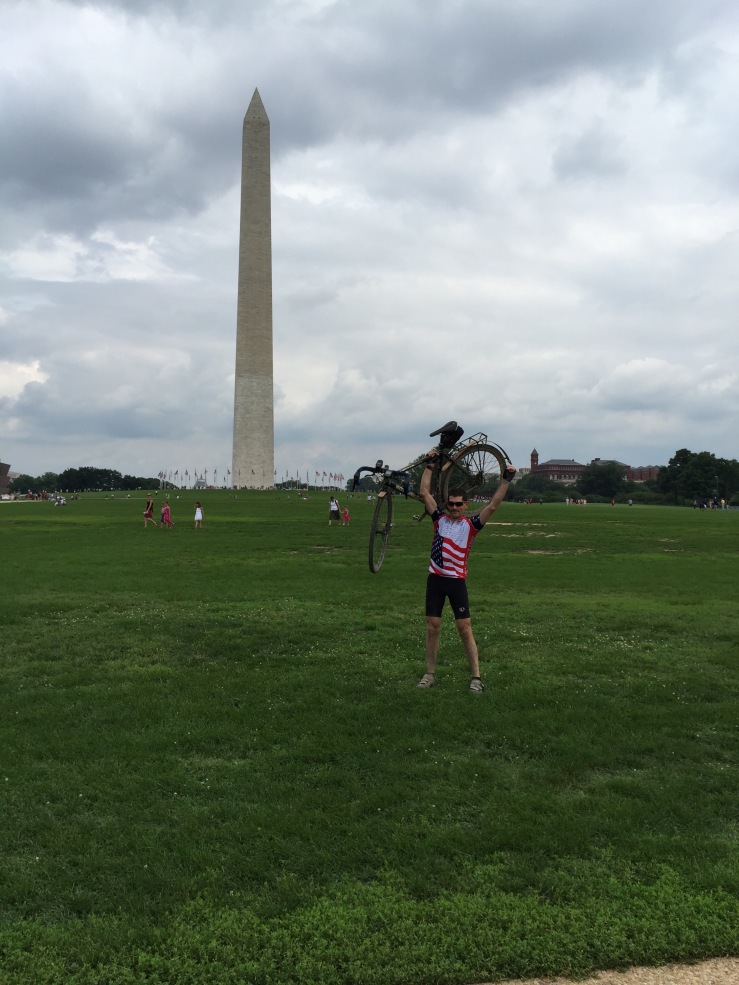 We kept on dodging and weaving along, slowly making our way up the mall.  Near the end, we happened across some sort of festival.  Some people were eating a mango. Some of you know that fresh mangos are one of my favorite things in the whole world. Combine that with 60+ miles of riding and I became single minded!  I found the fruit seller who graciously cut a very large mango up for me and put it into a plastic bag. I ate about half of it in record time as Joe watched.  I saved some for a little later after dinner.

We made the climb up Capitol Hill, and turned down the street to St. Peter’s.  Two minutes later, the rectory manager greeted us, helped us get our bikes stowed away, and showed us to our rooms in the rectory. 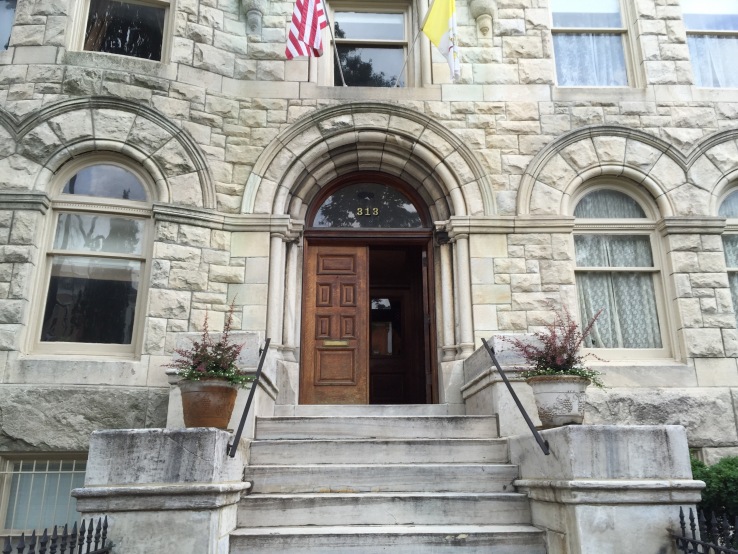 After hosing off my bags and shoes, I took a very much needed shower.  We walked up to Pennsylvania Ave and looked for food. We wanted a nice celebration dinner, with the no-fries rule strictly enforced. Dinner was at the Hawk and Dove.  We ate, recalled some funny moments of the trip, and celebrated. I capped off my dinner with a slice of cheesecake.  Everything went down so easily.  It was very tasty and I was very hungry. 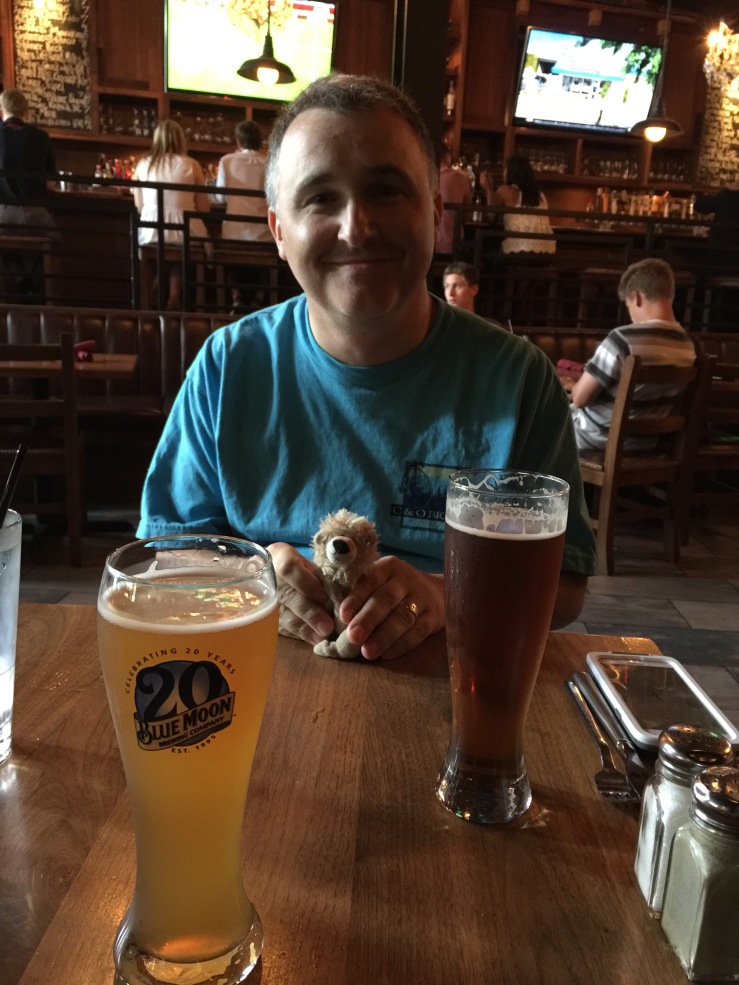 When we got back, Fr. Bill was cooking himself some very delicious linguini with shrimp. I know it is delicious because I had a small serving and it was very good!

After second dinner, Fr. Bill and I took a very nice walk around the Capitol and Supreme Court, through the surrounding neighborhood.  The air was beautiful and the sky was blue. We chatted and got to know each other a bit.

Now, it is time for bed.

I’ll put together a final installment with some thoughts about the trip.  Until then, peace!