I wasn’t planning on blogging about our trip home, but this was not an ordinary trip home. It was an adventure all in its own, a pilgrim postscript of sorts.

Our Saturday started off normally enough with a 1:15AM wakeup call at the hotel in Natanya so that we could be ready for a 2:00AM bus ride to the Tel Aviv airport.  Due to the strict security protocols at the airport, they require that you arrive about 3 hours before departure.  Normally, I arrive about 60-90 minutes before a flight with plenty of time to spare.  Not in Tel Aviv.  I think the 3 hour recommendation is about right.

We checked in at the Swiss Air desk and the first wrinkle in the plan came out: the check-in agent decided that my carry-on and my mom’s carry-on were too big to carry on.  So we were forced to check them through to JFK airport.  I generally just roll with things when traveling – if I can’t control it, just accept it, adapt, and move on.  Not a big deal, but there are two things worth noting here: I’ve traveled around the world with this roller board at least 40 international flights before.  I have been told only three times that it needed checked – two of them on this trip by Swiss Air people.  This small decision had big implications later in our trip.

We boarded our flight and took off for Zurich, then for New York.  The flights were pretty uneventful.  I was able to catch a few hours of sleep and then I binge watched the entire season 2 of Stranger Things on my iPad.  (If you happen to be a ST fan, perhaps someone can clue me in on why MadMax and her brother have any value to the storyline…)

The real adventure began when we touched down in New York City at JFK airport.  It isn’t clear what chaos had already arrived before us.  Was it the snow storm from the day before, was it the collision of two planes earlier in the day, or did someone at JFK just forget to show up to do their job?  Whatever combination of events and/or acts of God that had taken place, one thing was abundantly clear: JFK was one seriously messed up operation yesterday when we arrived.

After landing, our captain informed us that although we had arrived on time, there was not a gate available for our plane to pull into.  We would have to wait somewhere between 60 and 90 minutes to have a gate open.  Here’s what a planeload full of tired people looks like shortly after hearing that bad news. 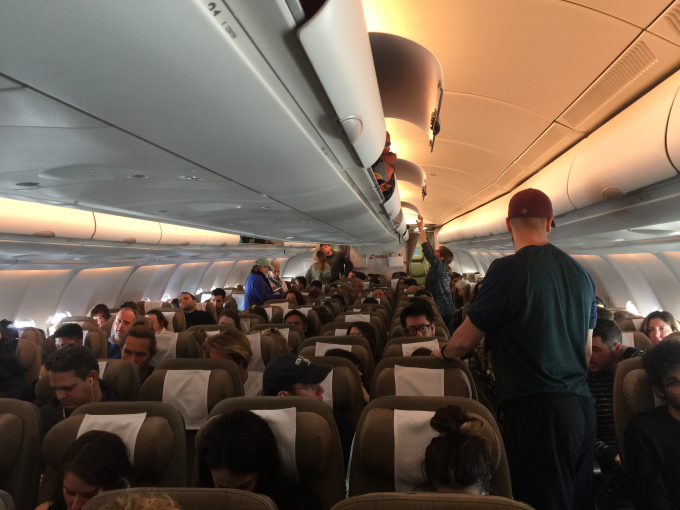 For the most part, my entire group of pilgrims were OK with the 60-90 minute delay.  We all had pretty long layovers in NYC before catching our flights home.  My Delta flight was at 5:10PM.  That gave me just under four hours before the boarding time.  No problem.

The next update added another 60-90 minutes of delay.  Then another delay.  And another.  Soon enough, I was becoming a little concerned about my flight, and two of my other Lexington people had missed their flights.

A little over 4 hours after our landing, we were finally allowed to deplane.  I had a very short amount of time to make my next flight to get me home.  It would be tight but we could make it if the bags were waiting on the carousel.  My normal international travel routine is to always carry my luggage onboard so it is with me, make a rapid move to immigration, get through, and get to my next flight.  However this time, my bag was under the plane.  If I’d had my bags with me, we might have had a chance.

When we got to the baggage claim, no bags came out for quite some time.  By the time our bags showed up, everyone in my group had missed their flights.  We all maintained very good humor about it.  It is what it is.  I used the Delta app to find another set of flights that would get us home later the same day.  I couldn’t get booked on the app, and the call-in line had a 2+ hour delay.  So we needed to head to the Delta desk to get rebooked.

After finally getting our bags we quickly wandered over to the Delta counter.  There was a very long line that didn’t move much at all.  Only two Delta agents at the counter.  I thought I had taken a panorama shot with my camera, but I don’t have it – so you’ll have to trust me.  The line was really really long.

It is what it is.  10 minutes passed.  30 minutes passed.  Not much movement in the line at all.  Assessing the situation, it was clear that all of the people ahead of me were in the same boat: we all had missed our flights and needed reassigned.  I wasn’t going to get home today, and probably not even tomorrow.  One other thing was certain: I didn’t want to sleep in JFK airport and neither did anyone in my group.

Side note: After hearing that JFK Terminal 4 had a pipe burst today right where we were waiting yesterday, I’m beginning to think JFK airport might be under the ban and subject to herem next. See: NY Post Article 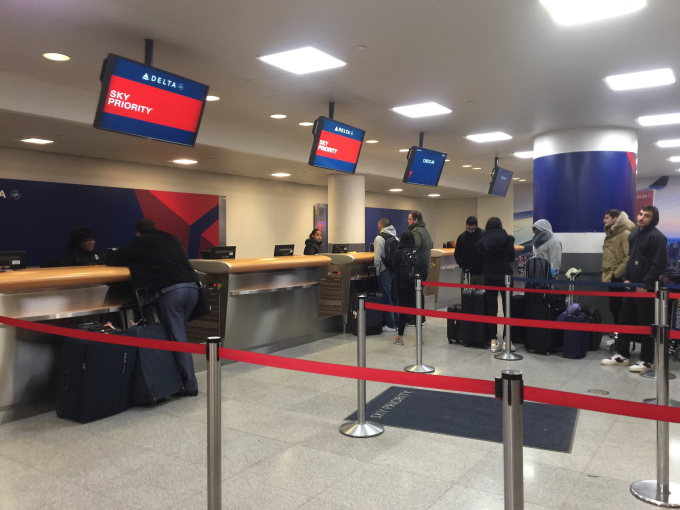 We needed to get home on Sunday and my plan needed quick action before others had the same idea.  I proposed my plan to the group and it was unanimously accepted.  It was time to phone a friend, or spouse to give them an assignment.  Amy’s husband did a great job of locating us two minivans at JFK and reserving them.  I plotted a route home using Apple Maps and then called my wife.  She did a great job of locating 3 hotel rooms about 90 minutes west of JFK … just outside of Bethlehem PA.  It could have just been sleep deprivation, but at that time, it was chuckle-worthy that we would be sleeping in Bethlehem after just leaving Israel.

We arrived around 10PM at the Springhill Suites and I was asleep within 5 minutes of entering the room.  I slept wonderfully.  We got up to finish our trip home.  Sadly I somehow left a very important thing behind in the hotel room.  I had a small vial of water from the Jordan river that I took out of my backpack.  It didn’t make it back to Lexington with me.  I must have left it at the hotel.

After a quick breakfast at the hotel, we were underway.  It was really a pretty fun road trip.  All of us had smiles on our faces and a joyful time.  We talked and a few naps were had.  I didn’t hear any complaining.  Amy found a Coke Zero and I treated everyone to their favorite road trip snack.  Overall, aside from taking an extra day to get home, it was really a nice way to end the pilgrimage. 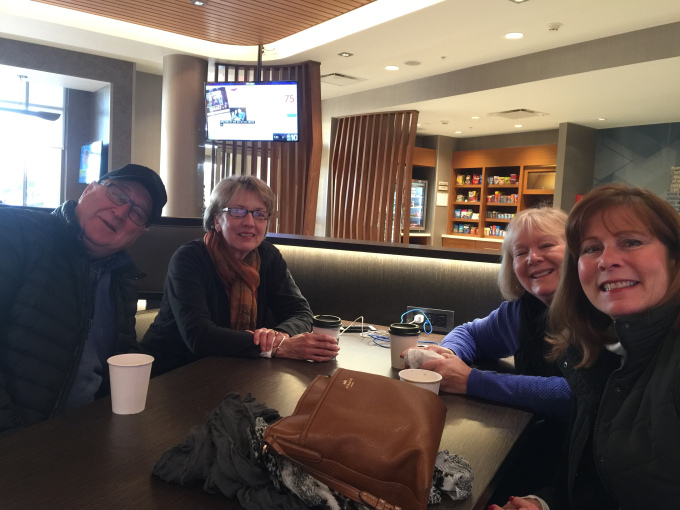 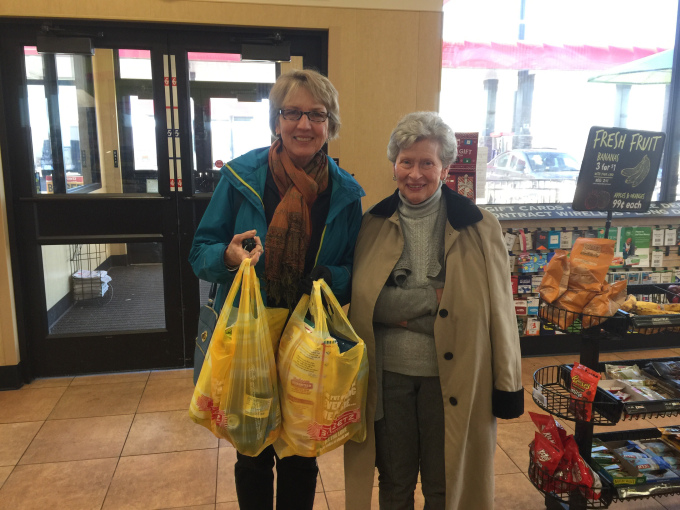 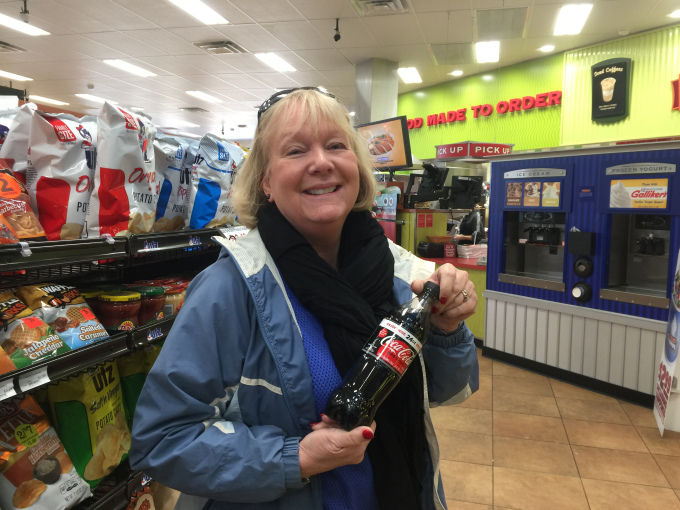 We arrived home around 6PM and I was greeted by my family and happily received by our two schnauzers. 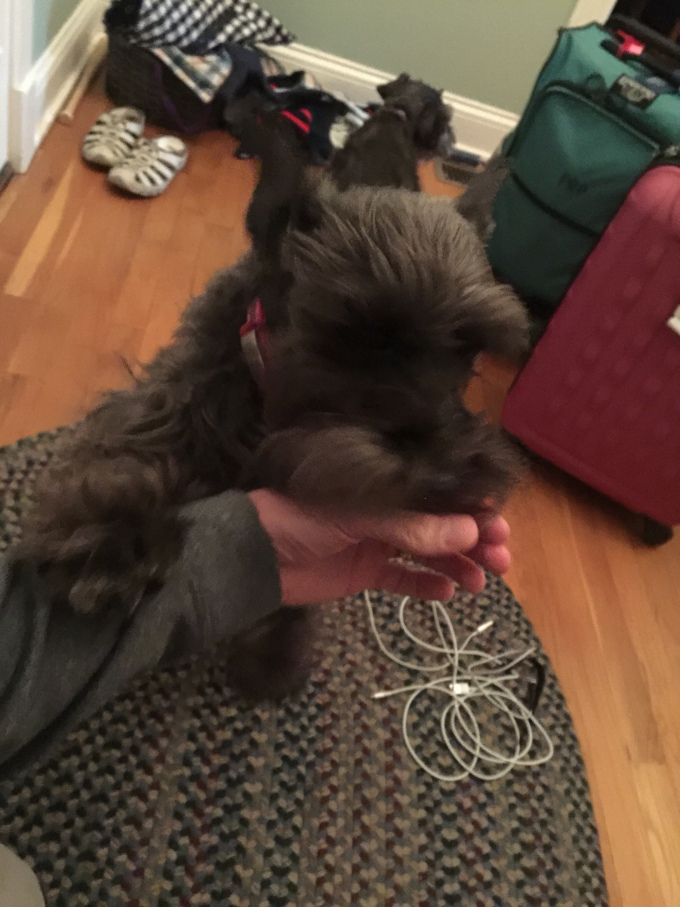 Stephanie had a great dinner ready for us.  After dinner and a warm shower, it is time to head to bed.  Tomorrow’s another day – I’ll see if Delta’s customer service is ready to handle my complaint yet and help me get credit for my unused flights.

There’s plenty to be thankful about: a great pilgrimage, safe arrival home, and good friends.  But unlike Jesus, there was a place for us to sleep in Bethlehem.  Life is good.