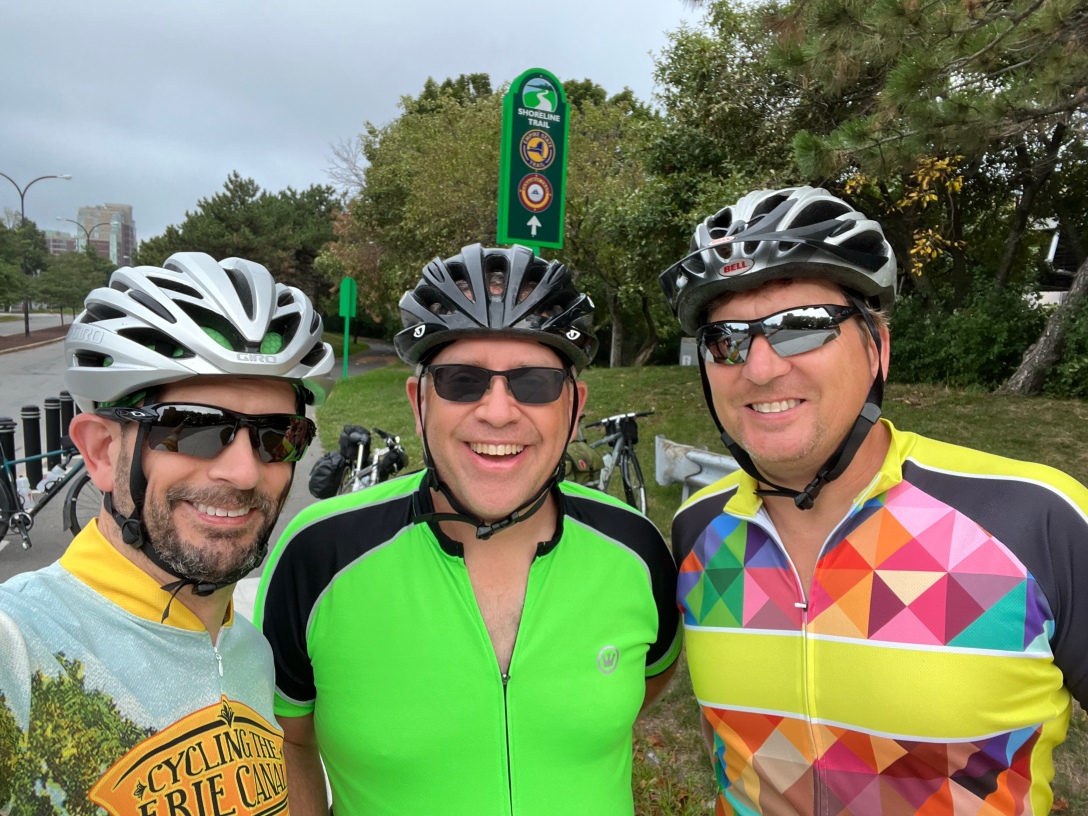 My very first bike tour in 2010 was a self-supported tour with my then 13-year-old daughter. I had no idea how to do a bike tour, but we figured it out. With the support of my wife who SAGd (Support And Gear) for us, we made it across. Since then, I have done a self supported bike tour every year. I’d consider myself a somewhat well seasoned bike tourer.

When we originally planned this year’s tour, there were four of us planning to go. Sadly, a few days before the tour, my friend Billy’s wife spiked a 104 fever. The dreaded Covid-19 screwed up our plans. Billy rightly chose to stay home to care for his family. So now there are three of us: me, JB, and Zubby.

We started out in downtown Buffalo, staying at a hotel. Last night we enjoyed a couple of beers with dinner and got our pre-tour excitement going. We looked over the plan for today and I slept very well.

We found our way to the Shorline Trail that runs along the Niagara river just west of Buffalo. We rode along that trail all the way up to the start of the Erie Canal trail in North Tonowanda. It’s a really pretty ride along the riverfront.

Once we made it to the Canal Path, it was mostly straightforward rolling up to Lockport. It is a combination of path and surface streets, but nothing aggressive for traffic.

Once in Lockport, we decided it was time for a real breakfast. We were just starting to discuss our options when someone looked over at us and said “You want to go to Tom’s across the canal over there!” We decided the local recommendation was good. As we cycled over, a nice older couple pulled up next to us and rolled down their window. The husband used to do long distance bike touring in his younger days. We talked for about five minutes. Great people. They also recommended Tom’s. So that’s where we went. The food was good and the environment was fun.

After breakfast, we began our trek east. The trail is mostly a finely crushed stone surface in this area. It is a slightly slower surface, but very comfortable when it is dry. We passed several little towns before we arrived in Medina. We rode into town and found a lunch/dinner stop.

Our last stop for today is our AirBnB just a couple miles north of Albion, NY. We checked in and got cleaned up.

Today’s ride was just over 65 miles. The weather was cool and overcast all day. A little misty rain early, but nothing too bad. We did have headwinds most of the day. Hoping that won’t keep with us. Tomorrow’s forecast is calling for rain most of the day. We’re hoping that changes overnight.

Until tomorrow…. May the Lord bless you and keep you.